Two Biggest failures occurred in India on Tuesday i.e 30th &  31st July 2012 when more than half of the population went deprived of electrical power. This has given alarming bells to the Indian power sector as this was the second incident back to back in 2 days.

Collapse was already on the way: On Jun 8th, Northern Regional Power Committee has already warned various northern states about the over drawl of power and Grid discipline should be maintained.Two weeks later on May 17th,CERC directed Northern states like Punjab,Haryana and U.P to restrict their usage/drawl within their specified schedule to LDC,therby maintaining the security of grid. But no action was taken from the aforesaid states owing to political interferences and various other factors which will be taken up later.Moreover,NRLDC issued 319 warnings to these states during the period. Haryana, Uttar Pradesh, Rajasthan, Punjab and Jammu & Kashmir were the prominent ones.So, the grid collapse was hardly sudden and states repeatedly ignored warnings knowingly well that under Articles 142 of the Electricity Act, the maximum penalty is . 1 lakh per violation — what a travesty this is.

Well before jumping in to WHY-WHY Analysis lets see how the Grid works: 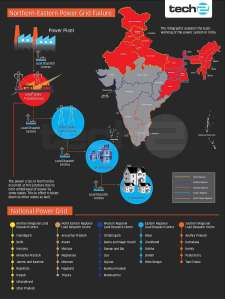 The Power Grid Corporation of India oversees the distribution of power via its transmission network spread across the country. It has 95,009 circuit-km of transmission network, 1,36,358 MVA  transformation capacity and approximately 28,000 MW inter-regional power transfer capacity. India is divided into five electrical regions, namely, Northern (NR), Eastern (ER), Western (WR), Southern (SR) and North-Eastern (NER). Of these, the four zones NR, ER, WR and NER are inter-connected, and form what is known as the New Grid. The Southern zone is synchronously interconnected to the New Grid. (The further division of states is shown in the infographic). Every zone is then responsible for the power needs of the states that fall under it. There is a load dispatch centre in every zone that oversees the transfer of power from the generating plant to the states and further. Depending on the need, every state then buys power and has to adhere to the withdrawal limit.

Owing to the size of our country, and the fact that the power generating plants are scattered across the terrain, we have a very complex power transmission network in place. But its functioning, from power generation to power distribution is more or less the same across all regional zones. In each zone, power from various power plants is subjected to inter-state transmission, wherein the regional load dispatch centres monitor and control its distribution to the various states in each zone as scheduled. The next step is intra-state transmission, wherein the state load dispatch centre allocates power to various areas within the state, and then at local level. (View diagram). The power is generated at very high voltage, but stepped down at each substation.

The Frequency band of 49.5 to 50.2 has been specified by CERC for efficient working of National Grid but still most of the times the Grid is “Under performing owning to terrible conditions of frequency.

Missed Targets: India has missed every capacity addition target since 1951, underscoring the urgency behind Singh’s effort to make $400 billion in investments, or 40 percent of the total spend planned on infrastructure, over the next five years, according to Power Secretary P. Uma Shankar, the top bureaucrat in India’s power ministry, Year on Year Targets are being revised as the year proceeds.Likewise in FY 2011-12,Target revision was like 1,00,000MW to 78700MW to 56000MW. Roadblocks to Installed capacity has been mentioned in my another POST already.

Demand-Supply Gap: The average annual increase in demand in India is 75-80 terawatt hours (TWh) per year, up from 50 TWh per year just five years ago. On the other hand, the increase in generation capacity per year does not match this. From 771 TWh in 2010, the capacity to produce power jumped to 811 TWh in 2011. This is leading to an increase in the gap every year. India’s capacity to generate 811 TWh per year — coming from hydro, thermal, gas and nuclear sectors — is 10 per cent short of the demand, and is a mere fifth of China’s capacity.Also, not all of the installed capacity is able to generate power 24 x 7. According to analysis,at any given time,Indian has the capacity to produce 2,05,340 MW.Around 15,000 MW of capacity is lying idle for want of coal or natural gas.According CEA out of 89 Thermal Power Plants, 23 are not running because of shortage of coal.

Overdrawal :The most possible cause of Grid failure was Overdrawal by Users i.e States from the  National Grid.Generally,States usually contract power purchases a day in advance. Some end up drawing more power than contracted, and are charged a penalty for the additional purchases. When a buyer draws more than its due, the frequency at which the grid operates drops, causing the system to collapse and forcing power plants connected to it to shut down.Ten north Indian power transmission companies and eight electricity dispatch centers had already been censured for drawing more power than their due between Jan. 1 and March 25 and on July 10 the states of Uttar Pradesh, Rajasthan, Punjab and Haryana were ordered by the Planning Commission to cease overdrawals from the grid to maintain its safety.On 30th and 31st July, Overdrawl was above normal and the most alarming condition was w.r.t UP. The states were violating clauses 6.4.8, 6.4.7, 5.4.2 (a) and 5.4.2 (b) of the Grid Code and Regulation 7 of the Central Electricity Regulatory Commission Regulation, 2009, and Section 29 of the Electricity Act. There were 63 instances when the frequency of the northern grid was below the permitted frequency

A long document has been released by CERC in the year 2010 about the Grid maintenance rules and regulations and the same has been defined in Indian Electricity Grid Code 2005 too. Document can be referred  here. http://www.nldc.in/docs/gridcode.pdf

A Breif Analsysis and Learnings:

This is a grim situation for the Indian Power sector and some solid solutions need to be provided in order to prevent from going in to Black out scenario.

But first, the discoms will have to be rated, not by handmaidens of the Power Finance Corp but by respected agencies with high credibility. Band-Aid reforms can’t cure cancer in any organ of the body. Cancer requires surgery and chemotherapy, in focused and controlled doses. India’s power sector has been getting Band-Aids as a proxy for bold reforms, whereas what it needs is surgery to complete the process started in 2003 with the introduction of the Electricity Act, which has been wrecked in its implementation.